When John and Colette Van Aerde, from Nanaimo, BC, decided it was time to build their dream home, they hired local developer Emauel Hajek (Emanuel Homes) to help them design and construct their dream house. With a passion for sustainable building practices, the driving force behind the construction of the house came from Hajek’s desire to ensure responsible land development. By stepping outside the box and continually discussing appropriate and potential options with the homeowners, Hajek’s completed project resulted in a near net-zero dream home which includes many features that make the house one of the most unique on the island today. 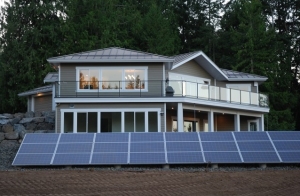 The home includes a solar photovoltaic system, a geoexchange system for heating and domestic hot water, and an enormous rainwater harvesting system to provide for the couple’s water needs. Yet as impressive as the house now is, it hadn’t always been the couple’s intent to include all of these sustainable features.

“They had no intention of doing all of these wonderful things, it just kind of grew as we went along,” says Hajek. “They initially just wanted to build a passive solar home.”

However it was because of Hajek’s interest in using sustainable options that initiated discussions about the house’s potential to incorporate where appropriate. As it turned out, the homeowners were more than willing to listen to his suggestions.

“I don’t think the right approach as a developer or builder is to only offer what customers ask for; it’s important to make them aware of what’s available”, said Hajek “We were continually telling them about different technologies. They were aware of some, but there was a lot of communication about options that where less familiar.”

First on the agenda was the issue of dealing with their water supply since the location of the house is in an area renowned historically for poor water quality. As a former resident of the area Hajek is well aware of the issue and the fact that many people have their water trucked in. The property did have an existing well drilled on it, but having never been pumped the quality was unknown, so the homeowners decided to opt for full indoor and outdoor rainwater harvesting instead. The decision to stay away from the well water did cause some controversy with a few sceptics, however after much research and biochemical testing (with help from John who holds six degrees to practice medicine) it didn’t take long for the sceptics to become supporters, and it’s a system that is looking better and better to more homeowners. As Hajek said “a previous client whose home I built two years ago admits that looking back they probably would have gone off-grid with municipal water if they were to do it over again”.

The final installed product was a 20,000 gallon cistern underneath the garage that was cast in place with concrete, and collects water from the 3200 sq./ft. roof. As Hajek commented on the system “We’ve proved Code and Standards (CSA) and beyond to planners and inspectors. It’s exceptional quality”.

The next decision that was made was to install solar electric to the house and despite not having sufficient south-facing roof space, the homeowners were undeterred from installing this feature. Instead of a traditional roof layout, a 5.5 kilowatt grid-tie system was installed as a ground mount, with the option to add a further two kilowatts to the system at a later date if necessary. The consultation, design and installation of the Solar system was provided by Terratek Energy.

“Obviously it’s always great to work with builders and developers who see the benefits of energy reduction technologies,” says Terratek principal Scott Fleenor. “But it also came down to the homeowners, who bought into the idea almost immediately.”

And Hajek couldn’t agree more. “They are so detail oriented, checking the energy monitors and graphing it out to track savings, but it’s wonderful because as we showcase these systems, they’ll be able to back it up, saying that we’re living it and it’s working great.” 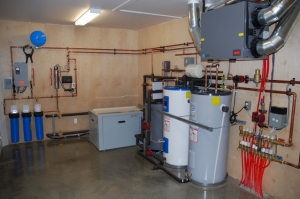 With water and electricity taken care of, the next installation added to the house came in the form of geoexchange. However the decision to install this additional renewable energy system came late into the building stage – to the extent that the in-floor heating was already half-piped when the homeowners decided to opt for geoexchange instead. Hajek was more than happy to make the switch but couldn’t help but wonder if the change of heart had come in the form of some friendly competition. As Hajek joked “John was competing with his brother in Belgium who is off the grid. I think that may have something to do with it!”

Stage 3 Renewables, led by engineer Jason Dunkley, was brought in to design, install and commission the system. It comes complete with outdoor reset strategy and domestic hot water pre-heat. There is also a hydronic delivery system including variable speed pumps for energy efficiency and a dedicated zone for an indoor planting bed heated by the geoexchange system.

“It was great to be involved with a project where both the builder and owner were committed to using technology directly from the site,” says Jason.

In addition to the above systems, permaculture was implemented from day one. With the grounds being specifically landscaped and developed for food harvesting, the homeowners are now growing food naturally and organically. The property is completely deer fenced with curved multi-terraces to ensure they and those whom they choose are the only ones that get to enjoy the bounty of their efforts!

While the house is now running near net zero; meaning it produces as much energy as it consumes, for Hajek the practice of sustainable building is just as important as the final product. During the construction the crew worked off-grid, using solar to generate the required power. With regard to building materials, they relied on local labour including the gutter system, which was produced from nearby Errington.

His enthusiasm for responsible building practices extends to a desire to see more incentives in place for BC, and the rest of Canada, to implement renewable energy. “When you look at Oregon or California, the tax credits they receive are insane. Those should be applicable to us here and now, and should be retroactive. We need to start voicing this, and making people aware.”

Hajek says that he too continues to learn about the technologies out there, and to date this is the greenest home he’s ever built, which came down to aligning with homeowners who were willing to take the jump, and having a team of experts able to turn the group vision to reality. “After doing our research, checking case studies and location logistics, rainwater made sense. Solar made sense. Geo made sense. And it made sense to the homeowners,” says Hajek. “They questioned it at times but the numbers don’t lie, they’re living it, and a year from now it’s going to prove a lot.”

So what do the Van Aerde’s think of the final product? Emanuel says the home has, naturally, exceeded their expectations. “They are elated. They had a trip booked to England and Venice and cancelled it because they wanted to stay home and watch their garden grow. They’re in love.”

*Emanuel Hajek can be contacted at emanuelhomes@gmail.com